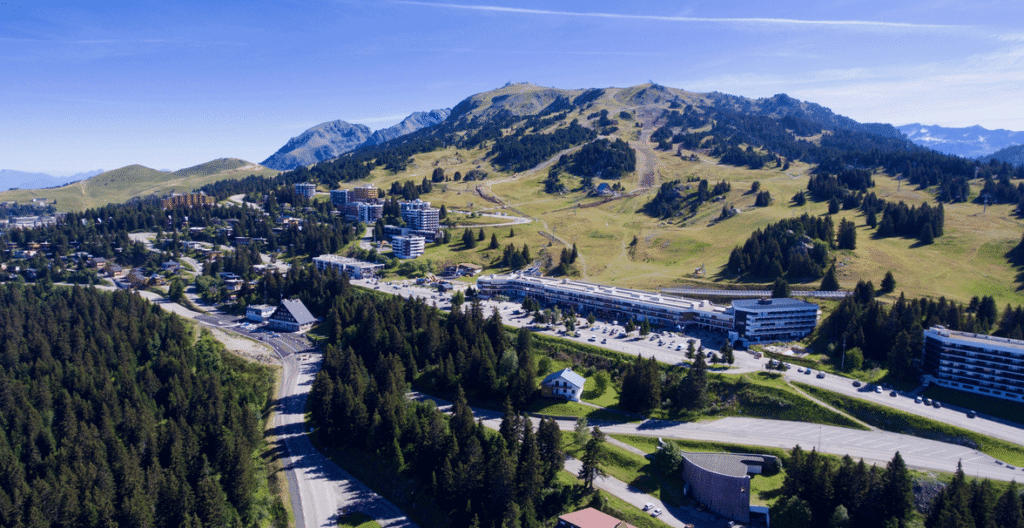 Chamrousse, a beautiful resort in the fir trees

In 1902, the first ski session was organized to the cross of Chamrousse, and which now attracts ski lovers thanks to its numerous slopes, accessible on foots from the dwellings. Finally, a bus shuttle allows to reach the station of Grenoble which is the closest to the station.

With an alpine ski run of up to 8 km, Chamrousse is a resort with 850 meters of vertical drop. The ski area also has a average altitude of 1,825 meters. With its 43 alpine ski trails, Chamrousse offers various levels of difficulty. Indeed, we find there Seven green runs, fourteen blue runs, sixteen red runs and six black runs.

In addition, 51 ha of snow of culture are waiting for you. In addition, the fifteen ski lifts of this ski resort will allow you to enjoy the move easily: seven ski lifts, two fixed-grip chairlifts, five detachable chairlifts and a gondola. It will also be an opportunity to admire the landscapes surrounding landscapes in complete safety.

The Chamrousse resort in a few figures

The resort of Chamrousse is very rich in activities, especially in winter it offers activities like :

Fat Bike Chamrousse : the resort of Chamrousse offers its trails for all fans of mountain biking. You will be able to take advantage of its slopes and its relief to make the full of strong sensation under snow.

Sledding Tobogganing: you can also go tobogganing in complete safety on the various tracks dedicated to this activity.

Snowshoeing Snowshoeing : you can enjoy all that the nature of Chamrousse has to offer. You will be able to admire these snowy landscapes, its fauna and its flora thanks to this activity.

Snowmobile Snowmobiling : This activity allows you to enjoy a new sensation of sliding on the snow. You can ride down the slopes and hills at full speed.

The resort of Chamrousse also offers many summer activities such as :

MOUNTAIN BIKING Mountain biking : whether it is mountain biking with or without electric assistance, the resort of Chamrousse allows you to enjoy it. You will be able to make the full of strong sensation and to descend the slopes under the sun.

Hiking Hiking : you can appreciate the beauty of the nature of Chamrousse in summer. You will be able to observe its magnificent landscapes as well as its fauna and its flora thanks to this activity.

Climbing : This resort also has an activity for climbing fans. Indeed, you can practice your sport on courses of different difficulty for always more sensation.

Tennis : Tennis fans are not left out. There are also tennis courts for you to play on.

Among these places that you must visit in Chamrousse, we can mention : Totems of Bachat-Bouloud, Chamrousse Olympic basin, Chalet du père Tasse- Malamute, Robert Lakes.

The resort of Chamrousse offers more than 23 restaurants among which we can mention My Little Warunf Grenoble, The Buccaneer, The Gaul’s Tavern.

Chamrousse offers a number of different accommodations such as the Hotel La Berangere, Auberge du Virage, The Step of the Fanfoué.

The ski area of the resort of Chamrousse has a size of 90 kilometers, divided into 43 trails. Among these runs, the longest is 3 kilometers. It has 41 kilometers of cross-country ski trails.

This area has an altitude between 1400 meters and 2250 meters high.

Their packages start at 36 euros per day, and 180 euros per week.

Yes, it has a Bike Park which measures 21 kilometers, has 6 trails and the longest trail measures 6.1 kilometers.

You can easily get there from the Grenoble train station. Then you just have to take one of the available shuttles to get to the resort.

Chamrousse resort is located in the department of Isère.

Yes, there is a webcam, which you can find at this web address https://www.chamrousse.com/webcams.html

You can find the latest weather report from the Chamrousse station at https://meteofrance.com/previsions-meteo-france/chamrousse/38410.

In Chamrousse, the ski lifts usually open the first week of December, until the beginning of April, but it all depends on the snow conditions of the massif.

What is skidata.io’s opinion about Chamrousse?

In the end, skidata.io gives the average rating of 7.5/10 to the resort of Chamrousse, which places it in the 72e French ranks. Its strengths are : the size of the domain compared to the rates, average snowfall, ski area.

Map of the ski slopes of Chamrousse

With your children, family or friends, you will spend around 1000 euros during your stay in the ski resort Chamrousse. Between the rental of ski equipment and the access to the whole ski area, the rates are variable. It all depends on your needs.