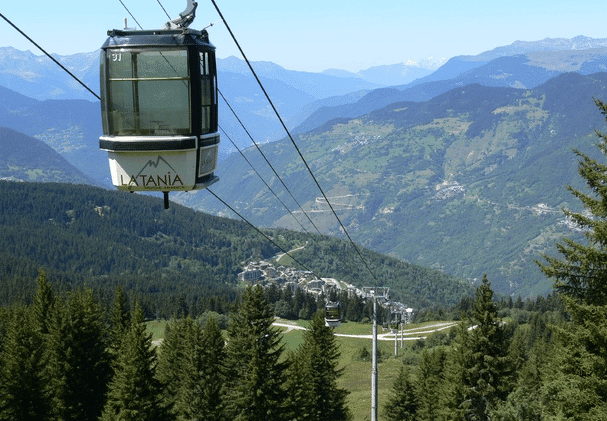 Located in 1400 m above sea level, halfway between Courchevel and MéribelLa Tania is a ski resort that has quickly made a name for itself. With its authentic spruce forests as well as the freshness of the wind, it has something to please everyone.

A history linked to the Olympic Games

La Tania is distinguished by the authenticity of its history. The station was created in the late 1980s. Its creation was intended to accommodate the Olympic Games of the year 1992. It is Jacques Labro, a great architect in this time, who built the great part of the development of the infrastructures of the resort. It is in December 1990 that the inauguration of La Tania was made. Today, it is one of the most visited French ski resorts. It is of course classified tourism.

A linked ski area of 600klm

La Tania has a ski area which offers many types of slopes. These have been built to the highest quality standards. They are suitable for all beginners, even the novices in the field. 330 trails are available for a total of 600 km. It has something to please the winter sports enthusiasts. The slopes are surrounded by completely natural forests, which makes the skiing very authentic. Up to 2 100 snowmaking are profitable.

In addition to skiing, Nordic activities are to be enjoyed on La Tania. Inter-station shuttles are available to facilitate the climb up the mountain. La snowshoe Snow shoeing also attracts many people to the resort. Certainly, La Tania is the place not to be missed to take some good weather.

The resort of La Tania in figures

The resort of La Tania is very rich in activities, especially in winter it offers activities like :

Ice climbing : This activity will allow you to enjoy the thrill of climbing ice. You can also admire the beauty of the resort from these heights.

Fat Bike: This activity will allow you to take full advantage of the resort’s terrain. You will be able to hurtle down the slopes at full speed on your fat bike.

Sledding : This activity is open to all and is perfect for moments with family or friends. You can enjoy the slopes offered by the resort.

Snowshoeing : This activity will allow you to discover the beauty of the nature offered by the resort. You will be able to admire its fauna and flora.

The resort of La Tania also offers many summer activities like :

Tyrolean traverse This activity will allow you to enjoy the thrill while exploring the resort from the authors.

Hiking: With this activity you can discover the beauty of the resort and its surroundings in summer. You will have the opportunity to discover its fauna and flora.

Among these places that you must visit in La Tania, we can mention : The church of Saint-Jean-Baptiste a la Perriere, Viewpoint Mont Bel Air, Lac Des Creux, Dent du Villard Forest.

The resort of La Tania offers more than 25 restaurants among which we can mention : Le Bouc Blanc, the Restaurant Marmottons, The Martagon.

The ski area of the resort of La Tania has a size of 600 kilometers, divided into 109 tracks. It has 26 kilometers of cross-country ski trails.

This domain has an altitude between 1350 meters and 2732 meters high.

Their packages start from 64 euros per day.

You can easily get there by being at the Moûtiers-Salins-Brides-Les-Bains train station. Then you can take one of the available shuttles to get to the resort.

The resort of La Tania is located in the department of Savoie.

The resort of La Tania is part of the tourist office of Courchevel La Tania. It is located in the Folières building 73120 La Tania.

Yes, there is a webcam, which you can find at this web address https://www.courchevel.com/fr/webcams

You can find the latest weather report from La Tania station at https://meteofrance.com/meteo-montagne/la-tania/731981.

In La Tania, the lifts usually open the first week of December, until the beginning of April, but it all depends on the snow conditions of the massif.

What is skidata.io’s opinion about La Tania ?

In the end, skidata.io gives an average score of 8.7/10 to La Tania resort, which places it in the 26e French ranks. Its strong points are : the average snowfall, the size of the domain in relation to the rates, the ski area.

Map of the ski slopes of La Tania