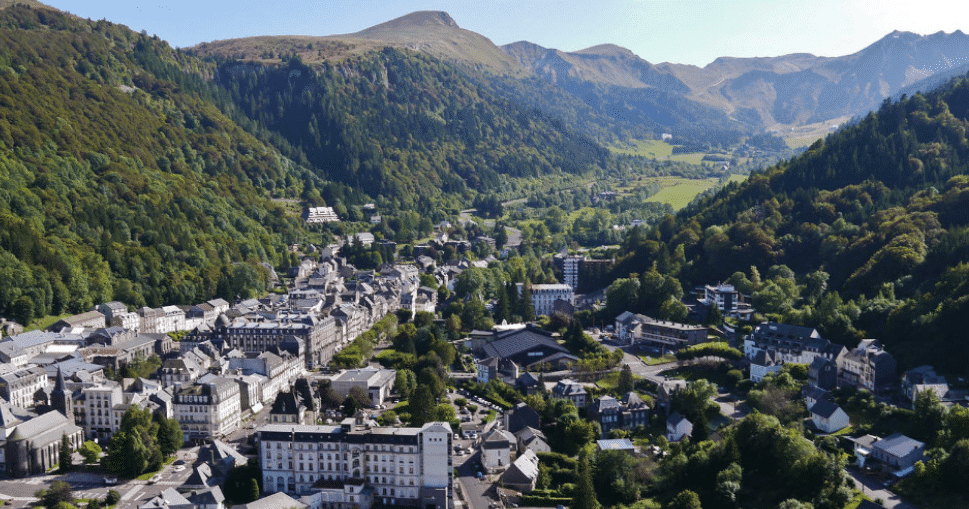 Le Mont Dore, a spa town at the foot of the Auvergne volcanoes

Le Mont-Dore both the name of a commune and a ski resort located in the department of Puy-de-Dôme, in the region of Auvergne-Rhônes-Alpes. The commune has a volcanic park, the regional park of the volcanoes of Auvergne, in which is located the station of sport of hiver of Mont-Dore. The latter is located more precisely on the slopes of Puy Sancy, which is one of the volcanoes surrounding the commune.

In addition, the climate of Mont-Dore is mountainous. In other words, it can be very cold in the winter, with subzero temperatures. Regarding the reliefthe one of Le Mont-Dore offers smooth slopes and accessible routes. This is favorable to the practice of ski activities.

A reputation that goes back to antiquity

Before the creation of the first ski circuits Mont-Dore has long been famous for its thermal spa. A reputation which goes back to theAntiquity. Indeed, the Romans and the Celts living in this area used its thermal waters to relax and treat skin and lung diseases.

This practice The practice continued over the centuries, so much so that thermal spas were founded in 1830. With a temperature of 38 to 44 degrees and composed of of silica as well as carbonic acids, the thermal waters of Mont-Dore are known to treat skin infectionsasthma and rheumatism. Many stations still abound in this region today.

The biggest ski resort of the Massif-Central

With a area of 41 km and an altitude ranging between 1200 and 1846 m, the ski resort of Mont-Dore is equipped with 31 ski slopes and 14 lifts including two cable cars, three chairlifts and nine ski lifts. The skiable part extends Grand Sancy, in the vicinity of the volcanic slope of Puy-Sancy.

These facilities also allow to connect Mont-Dore and its neighbouring region which is the ski resort of Super-Bresse, also located in Auvergne. While travelling through the areas of Mont-Dore by ski lifts, visitors can make a stopover on the Super-Besse.

The resort of Le Mont Dore is a very rich in activities, especially in winter it offers activities such as :

Luge Sledding : this activity accessible to all is perfect to have fun with family or friends. It will allow you to fully enjoy the sensations of sliding in complete safety.

Sled Dogs This activity will allow you to enjoy a special moment with its wonderful balls of hair. You will be able to enjoy the sensation of sliding while admiring the landscape.

Snowmobile Snowmobiling: This activity will give you a thrill while exploring the resort. You can speed down the hills on your snowmobile.

Snowshoeing Snowshoeing : thanks to this activity you can explore the resort. It will allow you to discover its different landscapes, its fauna and flora.

The resort of Le Mont Dore also offers many summer activities such as :

MOUNTAIN BIKING: This activity will allow you to have a great time. You will be able to explore the resort and enjoy its relief.

Trial Trials: this station also has trails of trial, they will allow you to perform your sport without any risk. You will be able to enjoy the landscapes that the station offers and its relief.

Bowling This station also offers a bowling for fans of the genre. You can spend time with friends or family.

Hiking This activity will allow you to explore the resort and its surroundings. You will have the opportunity to discover its fauna, its flora and even its different landscapes in summer.

Among these places that you must visit in Le Mont Dore, we can mention : The Caves of Châteauneuf, The Petrifying Fountains of Saint-Nectaire, The Rossignolet waterfall, The Lake of Guéry.

The resort of Le Mont Dore offers more than 30 restaurants among which we can mention : Les Fées Mères, Auberge de la Golmotte, The Estavou.

The ski area of the resort of Le Mont Dore has a size of 84 kilometers, divided into 31 trails. It also has 25 kilometers of cross-country ski trails.

This area has an altitude between 1200 meters and 1850 meters high.

Their packages start at 34 euros per day.

You can easily get there by being at the train station of Clermont Ferrand. Then you can take one of the available shuttles to get to the resort.

Yes, there is a webcam, which you can find at this web address https://www.sancy.com/webcam/mont-dore-bas-de-station/.

You can find the latest weather report from the Le Mont Dore station at https://meteofrance.com/previsions-meteo-france/mont-dore/63240.

In Le Mont Dore, the lifts usually open the first week of December, until the beginning of April, but it all depends on the snow conditions of the massif.

What is skidata.io’s opinion about Le Mont Dore?

Bottom line, skidata.io gives the average score of 6.71 to the resort of Le Mont Dore, which places it in the 149th place in France. Its strong points are: the average snow cover, the cost of a stay, the charm of the resort.

Map of the ski slopes of Le Mont Dore