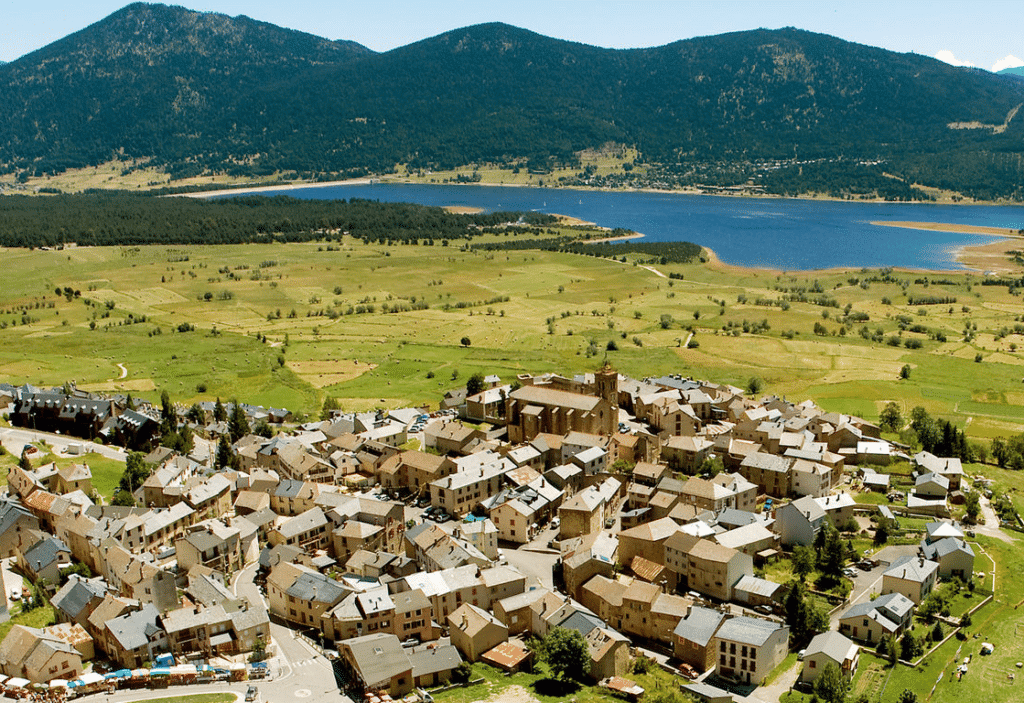 Les Angles is a French town in the department of Pyrénées-Orientales, in the Occitan region. It is located exactly in the canton of Mont-Louis and thus in the district of Prades, at the top of the plateau of Capcir. This commune is also bordering the regions of Formiguères, Maternale, Bolquère, La Llagone and Angoustrine-Villeneuve-des-Escaldes. Because of its location geographicalThis commune is part of the Communities of communes of the Catalan Pyrenees.

A rich past, turned towards pastoralism

The origin of the name  » Les Angles «  is quite ambiguous. If some researchers affirm that this name comes from the Catalan « Els Angles », others stipulate that it is derived from the title of an important character, Sanctus Salvador de Angulis, who lived in the around the year 908.

However, many discoveries in thecountry attest that the commune was already populated in the prehistoric era. However, it was only used as a route in the Antiquity and only becomes important from the Middle Ages. Thus, innumerable vestiges of the archaic times are still in the area. If we mention only the medieval castles, the parish church of Saint Michael and the church of Saint Mariade Vallsera.

In winterLes Angles is a hotbed of winter activities, such as snow races, snowshoeing and especially the descents on snowy slopes like skis. Thanks to its 1531 to 2808 m of altitude, the skiable territories of Les Angles are propitious to all kinds of slips namely the Alpine skiing, cross-country skiing and snowpark.

The circuits offer a ski descent from a peak and go through the forests before arriving in the heart of the village. Apart from the routes, the actors tourist have focused on the improvement of the ski lifts allowing to have a panoramic view of the region as the crow flies. Thus, there is a 16-seat gondola lift, a chairlift of 6 places in Les Angles.

The resort of Les Angles is very rich in activities, especially in winter it offers activities such as:

Paragliding Paragliding : this activity will allow you to take height and enjoy a unique panorama on the whole resort and its surroundings.

Climbing This station also offers you to discover the sensations offered by the climbing of the rocks of Capcir and Cerdanya. You will be able to make the full of strong sensation.

Sledding Sledding : you can enjoy a four seasons sledging track. It will allow you to have a great time alone or with others.

Snowshoeing This activity will allow you to discover the resort and its surroundings. You will have the opportunity to admire its beautiful snowy landscapes.

The resort of Les Angles also offers many summer activities such as:

MOUNTAIN BIKING: This activity will allow you to make the full of strong sensation. In addition this station has a Bike Park so that you can fully enjoy it.

Paragliding Paragliding : as in winter, you can take the height with this activity. The difference is that in summer you can enjoy the beautiful sunshine and the summer panoramas of the resort and its surroundings.

Hiking This activity will allow you to explore the resort and its surroundings at your own pace. You can enjoy its landscapes, its fauna and even its flora.

Among these places that you must visit in Les Angles, we can mention : The Cosmos Park, the Church of Our Lady of the Assumption, Animal Park Pla Del Mir, the Lake of Balcere.

The resort offers more than 20 restaurants among which we can mention : Le Goût du Jour, the Restaurant Hiely Lucullus, Alice and her wonders.

The ski area of the resort of Les Angles has a size of 55 kilometers, divided into 45 trails. Of these runs, the longest is 55 kilometers. It also has 43 kilometers of cross-country ski trails.

This area has an altitude between 1650 meters and 2400 meters high.

Their packages start from 41 euros per day.

Yes, it has a Bike Park that measures 28 kilometers with 7 trails, the longest of which measures 5.75 kilometers.

You can easily get there by being at the Ax Les Thermes train station. Then you can take one of the available shuttles to get to the resort.

The station of Les Angles is located in the department of Gard.

Yes, there is a webcam, which you can find at this web address https://lesangles.com/webcam/.

You can find the latest weather report from the Les Angles station at https://meteofrance.com/previsions-meteo-france/les-angles/30133.

In Les Angles, the ski lifts usually open the first week of December, until the beginning of April, but it all depends on the snow conditions of the massif.

What is skidata.io’s opinion about Les Angles?

In the end, skidata.io gives an average score of 7.78 to Les Angles, which places it in the top 50 French ranks. Its strong points are: the average snow coverage, the ski area, the proposed activities.