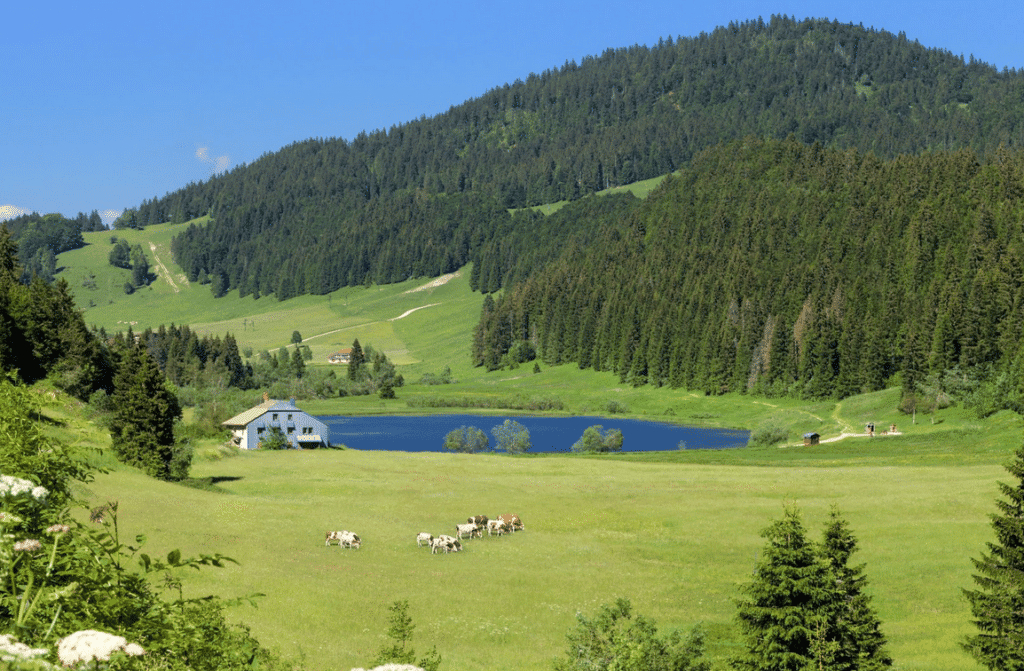 Les Rousses, a charming village on a Jura plateau

Located in the department of JuraLes Rousses is particularly close to the Swiss border. The city is home to many visitors every winter. They are mostly amateurs and professionals of skiing.

In addition to his altitude of 1,107 m, the commune is located in the center of « Risoux » and « Noirmont » whose altitudes are mainly 1,419 m and 1,567 m. It is also located close to the Rhine watershed, but also the Rhone watershed. Mountaineers and skiers will be at ease with the climate Continental mountain climate that effectively covers the municipality. It allows to pass from vacations memorable.

A border station with Switzerland.

The ski resort Les Rousses is very close to the border with Switzerland. This family resort in the Jura department is formed by the 4 villages following villages: Bois d’Amont, Lamoura, Les Rousses and Prémanon.

The splendor of the nature and the landscapes that compose it has made it a Flocon Vert labeled resort. The place is mainly proposed for the families who need to relax. But, this does not prevent to go there with friends or to realize a training in solitaire.

The ski slopes of Les Rousses

Before going to the stationIt is important to know that the ski area is quite high for the Jura. The altitude of the slopes varies between 1160 and 1680 m. In addition to its 32 ski liftsThe ski area covers an area of 115 ha with 55 runs of 50 km in total. The most longest on Les Rousses measures 2,9 km.

On the other hand, there are 32% of blue trails and red runs. For the green runs it is 26% and 10% for the black runs. The resort also has 4 snowparks and 18 ha of artificial snow as well as 6.2 km of snow cannons.

The resort of Les Rousses is very rich in activities, especially in winter it offers activities such as :

Sled dogs This activity will allow you to spend time with the mushers and their packs of sled dogs. You will have the opportunity to discover a unique sensation of sliding.

Fat Bike This activity will allow you to enjoy all the pleasures of mountain biking in the middle of the winter season. You will be able to hurtle down the slopes and take sharp turns while enjoying the scenery of the resort.

Snowboarding: This activity will allow you to discover the sensations of sliding and unique freedom. You will have the opportunity to take full advantage of the mountainous terrain of the resort.

Snowshoeing Snowshoeing : this activity will allow you to explore the resort in its entirety. You will have the opportunity to admire its landscapes, its fauna and even its flora.

The resort of Les Rousses also offers many summer activities such as :

MOUNTAIN BIKING: This activity gives you the opportunity to enjoy the relief of the resort. You will be able to enjoy strong sensations and admire the beauty of the landscapes of the resort in summer.

Golf Golf : this activity puts at your disposal 2 golf courses 18 holes so that you can fully enjoy all the pleasures of golf. You will also be able to enjoy the magnificent landscape of the preserved nature.

Hiking This activity allows you to explore the resort and its surroundings. You will have the opportunity to discover its nature. You can also admire its beautiful landscapes in summer.

The resort of Les Rousses offers more than 20 restaurants among which we can mention : La Ferme du Père François, The Refuge, The Chalet du Lac.

The ski area of the resort of Les Rousses has a size of 52 kilometers, divided into 55 trails. Of these runs, the longest is 2.9 kilometers. It also has 227 kilometers of cross-country ski trails.

This area has an altitude between 1160 meters and 1680 meters high.

Their packages start at 28 euros per day.

You can easily get there by being at the Dijon Dôle train station. Then you can take one of the available shuttles to get to the resort.

The resort of Les Rousses is located in the department of Jura.

Yes, there is a webcam, which you can find at this web address https://www.lesrousses.com/decouvrir/en-images/webcams.html.

You can find the latest weather report for Les Rousses station at https://meteofrance.com/meteo-montagne/les-rousses/394701.

In Les Rousses, the lifts usually open the first week of December, until the beginning of April, but it all depends on the snow conditions in the massif.

What is skidata.io’s opinion about Les Rousses?

Bottom line, skidata.io gives the average rating of 7.71 to the resort of Les Rousses, which places it in the 57th place in France. Its strong points are: the average snow coverage, the ski area, the charm of the resort.