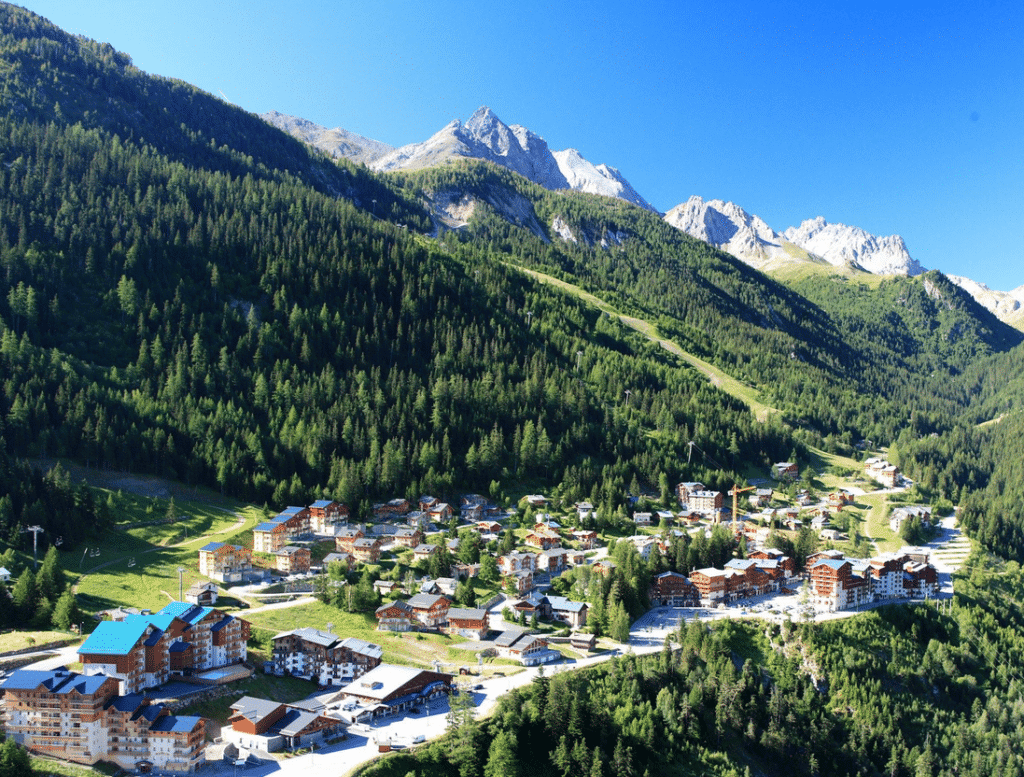 Valféjus, a ski resort on the Italian border

Located in border of Italy, the ski resort of Valfréjus is a beautiful resort savoyarde of the french alps. It is a station created on the site of an old hamlet, in 1983, and whosemodern architecture take up very well the Savoyard codes. The panorama is majesticsummer and winter, with a view on the massif des Cerces, of which a dozen mountains culminate above 3000m.

A resort rich in history

The name  » Valfréjus « comes from Fréjus which is the name of the massifborder between Modane and Bardonnèche in Italy.

In the early days, there were no residences, but only a few alpine chalets . It is only from 1983 that the first residences of tourism. Under the impulse of Jacques Geneletti, mayor of Modane and the developer and developerPierre Schnebelen, a new station is born: Valfrèjus .

Over time, the station expanded these activities package deals. In 1992, the resort launched the Skwal, an activity created by Manuel Jammes, and in the 2000s the speed riding. In 2009, the station deeply renovates its ski lift park by replacing almost all the equipmentwhich is a record for a station of this size.

Note that there had been projects in order to create a domain up to Italy, and a link with Valmeinier, Valloire, and Orelle, but this project will not finally see never see the light of day.On the other hand, the Valfréjus ski pass can give access to the La Norma resort, located in the same area of Modane, which adds 65klm of additional tracks.

A wide range of activities, summer and winter

The resort has many services of shopsand restaurants make your stay in the city easier. resort with the sale of many regional products. There are many activities possible in Valfréjus in summer or in winter, like the hikesand snowshoeing, the skating rink and the zip line. On the other hand, there are no no cross-country ski trails.

In summer Valfréjus offers you a multitude of trails for hiking and the possibility to discover the forest (where packs of wolves live… but they stay away and are harmless to humans) or ride on the mountain on horseback. Finally, the Accro and Ludoparc parks have all been specially designed for children.

The Valfréjus ski area in figures

The resort of Valfrejus is very rich in activities, especially in winter it offers activities like :

Skating rink : This activity gives you the opportunity to enjoy an ice rink. You can have fun with family or friends and enjoy the thrill of ice skating.

Yoga: You will be able to enjoy the beauty and calm of the nature of the resort to relax under the supervision of a professional.

Snowshoeing Snowshoeing : this activity gives you the opportunity to explore the resort in winter. You will be able to admire its landscapes in winter and discover its fauna and flora.

The resort of Valfrejus also offers many summer activities such as :

Hiking This activity allows you to explore the resort at your own pace. You can discover its nature while admiring its sunny landscapes.

MOUNTAIN BIKING: This activity allows you to take full advantage of the relief of the resort in summer. You will be able to make the full of strong sensations while descending its slopes at full speed.

Via Ferrata Via Ferrata : this activity gives you the opportunity to enjoy the different climbing routes of the resort. You will be able to enjoy strong sensations while admiring unique landscapes.

Horseback ridingThis activity gives you the opportunity to explore the resort on the back of a horse. You can enjoy the nature of the resort without too much effort at your own pace.

Among these places that you must visit in Valfrejus, we can mention : the Sanctuary of Notre-Dame du Charmaix, The Fort of Esseillon, the Musobar Museum of the Frontier, the Cascade of Saint-Benoit.

The resort of Valfrejus offers more than 30 restaurants among which we can mention : L’Echappée, The Dahu/ La Bodega, The Piccolina.

The ski area of the Valfrejus resort has a size of 135 kilometers, divided into 23 trails. Of these runs, the longest is 13 kilometers. It also has 0 kilometers of cross-country ski trails.

This area has an altitude between 1550 meters and 2737 meters high.

Their packages start at 32 euros per day.

No, it does not have a Bike Park.

You can easily get there from the train station of Modane (Italy). Then you can take one of the available shuttles to get to the resort.

The Valfrejus ski resort is located in the Savoie department.

The resort of Valfrejus is part of the Valfrejus tourist office. It is located at Rue des Bettes, 73500 Valfrejus le Charmaix, France.

Yes, there is a webcam, which you can find at this web address https://www.haute-maurienne-vanoise.com/hiver/valfrejus/webcam/.

You can find the latest weather report from the Valfrejus station at https://meteofrance.com/meteo-montagne/valfrejus/731571.

In Valfrejus, the lifts usually open the first week of December until the beginning of April, but it all depends on the snow conditions in the mountains.

What is skidata.io’s opinion about Valfrejus?

Bottom line,skidata .io gives the resort of Valfrejus an average rating of 7.42, which puts it in the 74th place in France. Its strong points are: the size of the domain compared to the price, the average snow cover, the evaluation of the Internet users.

Map of the Valfréjus ski slopes

Valfréjus is 200 km from Lyon, 110 km from Chambéry and 100 km from Turin in Italy. By road, the resort of Valfréjus is accessible from Lyon and Chambéry by the highwayA43 towards Italy through the Fréjus tunnel, which starts under the village. If you go there in winter, you will have to think of equipping yourself with winter tires, or chains on your tires.

If you come intrainYou have to stop in Modane, and there are shuttle buses, which make the connection.